If the World Were 100 People

In my Certified Peer Educator (CPE) training for my job as a peer health educator, we have been reading chapters from the textbook Peer Health Education: Concepts and Content by Hong, Robertson, Catanzarite and McCall. I have had a lot of problems with this text, especially concerning its (mis)information on sexual health and responsibility. For example, the textbook highly recommends the use of spermicides containing nonoxyl-9, an organic compound that immobilizes sperm. However, there are a whole host of problems associated with nonoxyl-9 that the book fails to mention. For example, many women experience allergic reactions to nonoxyl-9; besides being quite uncomfortable and unpleasant, this increased irritation causes more vaginal lesions. This, according to a study conducted by the World Health Organization, can increase the incidence of HIV infection, despite the book's claim that spermicides provide “substantial” STI protection. Indeed, according to kidshealth.org, spermicides alone do not prevent sexually transmitted infections (STIs). In addition to increasing the risk of contracting HIV, regular use of nonoxynol-9 has been shown to increase the risk being infected with human papillomavirus (HPV), which can cause cervical cancer.

Anyway, enough with the rant on nonoxyl-9. My point is, despite the fact that I have encountered quite a few frustrating problems with this textbook, I came across a section that really intrigued me in the chapter about the importance and value of diversity.

“Consider this,” the book says. “If we shrank the world's population to a village of 100 people, it would look approximately like this:

Although the use of the word “Jewish” as noun is somewhat absurd and reminiscent of the Mandy Moore movie Saved (“She was the only Jewish ever to attend American Eagle academy”), the overall concept of representing the world population as a village of 100 people seemed clever and caught my attention. I decided to look into this idea a little further.

Even though this book was apparently updated in 2011, most of its statistics seem quite outdated. With some quick research, I came up with what I believe to be a slightly more modern representation of the world if it were condensed into a village of 100 people today:

Despite its outdated statistics, this textbook has a pretty valid point: “When seeing the world from such an incredibly compressed perspective,” the book says, “the value of both tolerance and understanding becomes glaringly apparent.”

Do with this information what you will (and be sure to check my facts—clearly I don't have a problem challenging information that I read, and neither should you!). Statistics can be misleading, and sometimes they don't mean much unless we know exactly how they were calculated (and by whom). Nevertheless, looking at this (perhaps not entirely accurate but still interesting) representation of the world is certainly thought-provoking.

After I had painstakingly looked up every individual statistic, I came across this website that has posted its own representation of “If the World Were 100 People,” as well as references to detailed research and source information and the 1992 statistics by Donella Meadows who originally came up with this concept. This portrait of the world uses slightly different indicators to represent the population, but the idea is the same. The world is not nearly so big—nor so homogenous—as we are sometimes led to believe. If we could always view the world this way—as a pretty small group of people who, although quite different in backgrounds and beliefs, are just trying to make their way through life like you and me—maybe we would all be a little more understanding, a little more open, and a little more tolerant.

It sounds idealistic. It sounds a little dreamy. But maybe, just maybe, we would.

Disclaimer: Most of the information in this post—if no other link was provided—comes from Wikipedia, which I wholeheartedly support as a source of accurate, reliable information.

*The sex ratio for the world population is about 101 males to every 100 females. This gender imbalance is affected by numerous factors: although women statistically live longer than men, more male babies are born than female babies. This is because the “natural sex ratio” is 1.06 males for every 1 female; that is, without any external interferences, naturally more male babies are born than female babies. However, certain environmental, social and economic factors also contribute to the gender imbalance of the population in which there are a greater number of males. For example, in certain countries female fetuses are selectively aborted, and in more extreme cases, female babies fall victim to gender-based infanticide.

**According to the CIA World Factbook, “There are no universal definitions and standards of literacy. Most presented rates are based on the ability to read and write at a specified age. Information on literacy, while not a perfect measure of educational results, is probably the most easily available and valid for international comparisons. Low levels of literacy, and education in general, can impede the economic development of a country in the current rapidly changing, technology-driven world.”

Today, I received this email from Lila Igram, founder of Connecther, an organization that “helps women help themselves.” 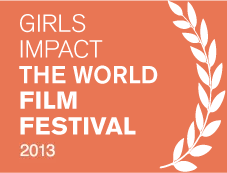 The Girls Impact the World Film Festival held its inaugural awards ceremony honoring girls who are impacting the world through film at Harvard College on Saturday, February 23, 2013. The Girls Impact the World Film Festival, co-sponsored by Connecther.org & the Harvard College Social Innovation Collaborative called on students to submit 3 - 5 minute films on issues related to advancing women and girls globally. The GITW Festival Awards Ceremony screened phenomenal films, all made by students, addressing global health, education, child marriage, sex-trafficking, women in media and many other issues. The winning film, International Boulevard by Zoë Simone Yi and Rebecca Dharmapalan, Oakland School for the Arts - was a shocking documentary about sex-trafficking in Oakland, CA.

Christy Turlington Burns, founder of Every Mother Counts had this to say about International Boulevard, "Great job bringing a global issue closer to home. Great use of experts, great film production. Had a very cohesive message and was informative all the way through."

"This film was excellent. The message was very clear and the use of interviews with people on the front lines was a strong mechanism to frame the issue." Jean Oelwang, CEO of Virgin Unite

1st Runner up went to Teen Pregnancy Second Runner up & Cisco's Most Innovative Film Prize went to This is a Girl.

People's Choice went to Because I Am a Girl.

Please see what Jean Oelwang, CEO of Virgin Unite had to say about the event here.

We would love to hear from you. Please do write with comments and/or feedback. Also, check out & like our Facebook page for pictures of the event at: www.facebook.com/connecther

Looking forward to next year! This is only possible with your support!

Lila also told me in the email that "In many ways, watching It Only Takes a Girl inspired us to do this . . . you continue to make a huge impact!" I am very honored that Connecther feels that my video played a role in inspiring this amazing project. This festival was a truly wonderful way to get girls involved in issues that affect all of our lives. For more information on Connecther, please check out my blog post “Highlighting Charities.” They are a great organization that I have been following for a long time. Please take a moment to watch some of these incredible winning videos, and spread the word!
Posted by gabriella at 3/04/2013 01:08:00 PM 7 comments: