Please, Please Read Half the Sky 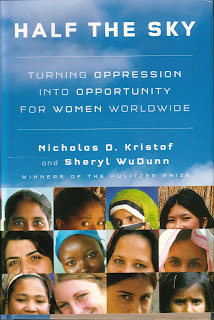 I know I have been slacking lately on posting new blog entries. For that, I apologize. I have lots of important and fascinating topics to write about, I just need to find the time!
In the meantime, I would like to make a short post about New York Times journalist Nick Kristof and his wife Sheryl WuDunn's book, Half the Sky. Nick Kristof is an incredible human rights activist and journalist, and he is my personal hero. You can follow him on Facebook here and Twitter here (I know I do!).

I have been reading Half the Sky for a few weeks now (I am a painfully slow reader), and I absolutely devour every page. My friends and family like to poke fun at me sometimes because while I read it, I sometimes take out my highlighter and highlight in my book (I'm a nerd, what can I say). Today I would like to share with you a few of my favorite passages from this masterpiece. Enjoy, and learn something new.

"Many of the stories in this book are wrenching, but keep in mind this central truth: Women aren't the problem but the solution. The plight of girls is no more a tragedy than an opportunity." (xviii)

"Women aged fifteen through forty-four are more likely to be maimed or die from male violence that from cancer, malaria, traffic accidents, and war combined." (61)

"This is not a tidy world of tyrannical men and victimized women, but a messier realm of oppressive social customs adhered to by men and women alike." (69)

"They know that a woman humiliated [by being gang-raped] has no other recourse except suicide...They don't even need to use their weapons. Rape kills her."(70)

"Women came to her with their faces destroyed by acid attacks or with their noses chopped off--a traditional punishment for 'bad' or 'loose' women." (75)

"Of all the things that people do in the name of God, killing a girl because she doesn't bleed on her wedding night is among the most cruel." (81)

"She ended up in obstructed labor, with the baby stuck inside her birth passage. After seven days, Mahabouba fell unconscious, and at that point someone summoned a birth attendant. By then the baby had been wedged there for so long that the tissues between the baby's head and Mahabouba's pelvis had lost circulation and rotted away. When Mahabouba recovered consciousness, she found that the baby was dead and that she had no control over her bladder or bowels. She also couldn't walk or even stand, a consequence of nerve damage that is a frequent by-product of fistula." (94)

(If this description of obstructed labor and obstetric fistula horrified you as much as it did me, please visit The Fistula Foundation website.)

"Right now the amount we Americans spend on maternal health is equivalent to less than one twentieth of 1 percent of the amount we spend on our military." (98)

"It was considered undesirable to teach a girl to read and write. There were no schools for girls, because if girls are educated then they grow up to talk about genitals." (123)

"Somali superstition holds that burning a baby on the chest will prevent tuberculosis." (128) (THIS is why education is important!)

"Whatever one thinks of abortion, it's tragic that up to 40 percent of all pregnancies globally are unplanned or unwanted--and that almost half of those result in induced abortions." (134)

"During the Taliban era, if a woman went to market and showed an inch of flesh, she would have been flogged; now, she's raped." (150)

"Several studies suggest that when women gain control over spending, less family money is devoted to instant gratification and more for education and starting small businesses." (192)

"If we believe firmly in certain values, such as the equality of all human beings regardless of color or gender, then we should not be afraid to stand up for them; it would not be feckless to defer to slavery, torture, foot-binding, honor killings, or genital cutting just because we believe in respecting other faiths or cultures." (207)


I didn't start my highlighting until later in the book, so I don't really have many passages from the early chapters on human trafficking and sex slavery. These chapters are perhaps the most horrifying, and I was brought to tears on nearly every page.

If you want to be a good and educated citizen of the world, I strongly recommend that you read Half the Sky. I don't think I am exaggerating when I say it can change your life, or at least your outlook on life.
Posted by gabriella at 2/06/2012 10:47:00 PM